Paris: Australian Christopher O’Connell may turn his back on Wimbledon qualifying and play elsewhere after the time-honoured grass-court major was stripped of its ranking points over its hard-line stance to ban Russian and Belarussian players.

The option of winning points at lower-profile events, instead of donning Wimbledon whites, could prove the difference for the 27-year-old, who wants to jump into the world’s top 100.

Powerful player bodies the ATP and WTA came down hard on the All England Club after it made the controversial decision to prevent stars such as men’s world No.2 Daniil Medvedev from playing this year, concerned that Russian success could be used as propaganda to fuel the war in Ukraine. 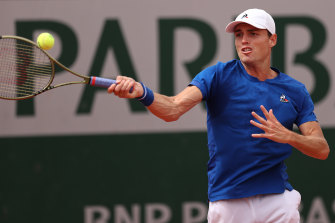 Amid fears that players will skip what has effectively become an exhibition event, O’Connell is weighing up his options.

“I’m speaking with [my] coaches about what I’m going to do. At this stage, I’m in qualifying for Wimbledon and I want to get into the top 100 and there’s no points on offer from Wimbledon. So, I don’t know what I’m going to do to be honest,” said O’Connell, the world No.124, after exiting Roland Garros in the first round.

“Wimbledon is still such a special event,” Norrie told British reporters. “But I think you’ll see a lot of top players not playing, just resting and getting ready for the hard-court events. Especially those that don’t worry too much about the money.”

On a down day for the Australian contingent at Roland Garros, O’Connell was joined by Thanasi Kokkinakis, Alexei Popyrin and Astra Sharma in exiting.

A frustrated Popyrin, 22, rued missed chances to tough clay-courter Fabio Fognini, of Italy, but was looking at the upside.

“My confidence is not at the highest, even though I won a title [in Bordeaux, France] last week,” said Popyrin.

“I’ve had a tough six months. I’ve dropped down the rankings. I’ve had a few niggles with injuries here and there. I struggled this year.

“I think my level today is probably not where I want it to be, but it’s a step in the right direction.”

O’Connell said if he hadn’t made his Wimbledon main draw debut last year it would be a different equation.

Other tour players, including fellow Australian Ajla Tomljanovic, are frustrated that Wimbledon will be points-free, giving them no chance of defending hard-won points. Tomljanovic reached the quarter-finals in London last year, losing to eventual champion Ashleigh Barty.

Becoming entrenched in the top 100 has the added benefits of direct entry to more tournaments for players such as O’Connell, a wildcard in Paris.

“If I go to Wimbledon, then I’m in qualifying and I waste a week there. And if I happen to qualify, then I waste another week,” O’Connell said.

“I feel I can play good grass-court tennis, so all those lead-in events I can have some good results there – but then also I could play something on clay.

“I’m sure a lot of players are talking about it at the moment and figuring what they’re going to do.”

Medvedev has already ruled out legal action against the All England Club and he, too, is looking at alternatives to Wimbledon, such as grass events in the Netherlands, German and Spain.

As the clay-court major ground into action, former Australian Open finalist Dominic Thiem was beaten in straight sets. The Austrian conceded he may need to drop down a tour level to find form after a wrist injury.

“There’s not enough power yet in my shots, and it’s not only the forehand, I have way too low percentage of first serve, the first serve is not hurting enough,” Thiem said.

“The backhand is OK, but as well it’s not long enough, it’s not fast enough.

“The key is just to be patient, continue being patient, work on the stuff which is not working, and then it will come back, but it will take time.

“I have to be patient, and I think it’s going to take a few more months until I can really say, okay, now I’m ready to beat those top guys again.”

Thiem said he would probably turn to Challenger level tennis.

“If I’m honest to myself, I was, in all the matches I played, still pretty far away from a win.

“I’m not really thinking about it, I just have to improve and then hopefully it goes from itself and then the first match victory is coming and then things are also working much better match-specific.”

Watch every match from Roland Garros ad-free, live & on demand on Stan Sport, with courts streaming in 4K UHD.
Coverage of select matches commences on 9GEM from 6.30pm AEST each night.