January’s Australian Open will herald a new era for tennis thanks to the definite absence of Roger Federer and Serena Williams, but it appears increasingly likely that nine-time champion Novak Djokovic could return to his much-loved Melbourne Park hardcourts.

After a tennis year in which former world No.1 Djokovic won Wimbledon but missed two of the majors – the Australian and US Opens – due to his choice not to be vaccinated against COVID-19, there’s a lingering question whether he can again enter Australia. 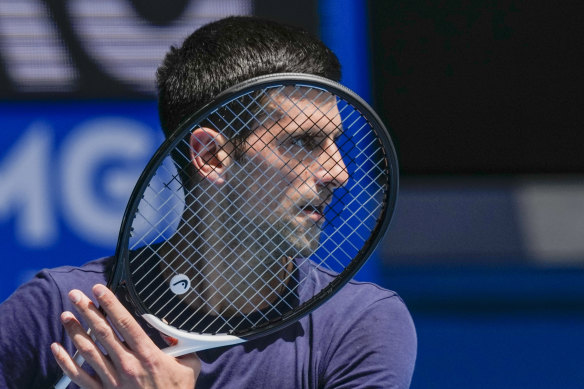 Novak Djokovic did not play the Australian or US Opens this year.Credit:AP

Djokovic was deported on the eve of the Australian Open after the Australian government ultimately prosecuted the case against him that he may have disrupted civil order and undermined the nation’s pandemic response.

Under Australian immigration law, Djokovic cannot be granted a visa for a three-year period unless Australia’s Immigration Minister agrees to an exemption on compelling or compassionate grounds.

Australian Open boss Craig Tiley has hinted that the circumstances could have shifted for Djokovic.

“We are on track to have all the top players back,” said Tiley, when quizzed at a Melbourne Victory “Victory In Business” luncheon on Wednesday.

Djokovic, winner of the past three Australian Opens before Rafael Nadal claimed the event in the Serbian’s absence, was barred from Australia under decisions made by the former Coalition government and then Immigration Minister Alex Hawke.

In a high-profile and drawn-out case that attracted global headlines in January, Djokovic was denied the chance to defend his Australian Open title after the Federal Court validated a federal government decision to deport him less than 24 hours before the event started.

A full bench of the court ruled unanimously that he should be removed from the country because of the danger he would stoke anti-vaccination sentiment.

On Wednesday, Tiley added at the business lunch: “We are at a different point in time now than we were nine months ago and I think it’s a very different environment with people travelling freely around the world and we hope to have all the best players here in January.”

All parties with an interest in Djokovic’s case – the player and his representatives, Giles and Tennis Australia boss Tiley – have largely remained quiet about the tennis star’s case.

The minister would not comment when contacted again on Wednesday.

At the French Open in May, however, Djokovic confirmed he knew Australia had had a change of government.

“Yes, I heard the news,” said the Serbian.

“But, I mean, I don’t know anything about whether my visa is going to be reinstated or whether I’m going to be allowed to come back to Australia.”

Tiley also indicated that there could be official recognition of Federer’s career at some point. “He won’t be here in January, but we are going to bring him back in some capacity.”