The Wimbledon clash between Oscar Otte and Andy Murray was momentarily postponed after a line judge needed to be taken away after falling ill. Murray and Otte were level at one set apiece with the German tennis star a break up in the third.

And he was just about to get ready to serve for the set when he was called to wait by the umpire.

There was some initial confusion as to what was causing the delay before it was announced what the reason was.

The umpire announced: “Ladies and gentlemen, one umpire is not feeling well.

“We are just waiting for a replacement.” 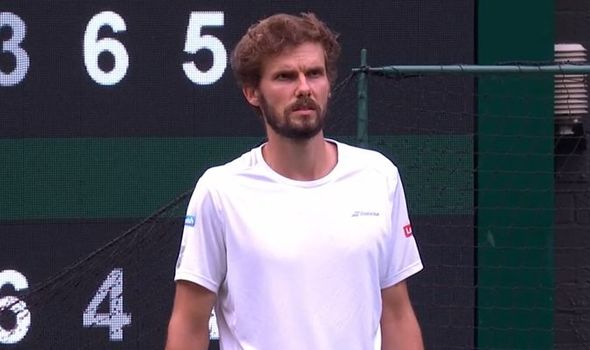 And while the umpire’s message was clearly met with well-wishes for the line judge, Tim Henman noted that the small delay may have added some pressure to Otte.

Henman said: “We certainly do [wish them well], but it’s not an ideal time for an interruption when you’re about to serve for a 2-1 lead.

“You’re kind of wondering whether the centre service line at Otte’s end of the court could do a bit of baseline duty.”

BBC co-commentator Andrew Cotter then commented that Otte looked “a little bit bemused by it”.

Several minutes passed before the umpire called upon another line judge to perform the role.