They don’t know what to call themselves yet but local wildcards Jason Kubler and Rinky Hijikata will play off for the Australian Open doubles title on Saturday, a year after Nick Kyrgios and Thanasi Kokkinakis triumphed.

Fans are scrambling to come up with a nickname for the smash-hit first-time pairing, who are not overly enamoured with being given the ‘Kinky’ tag. 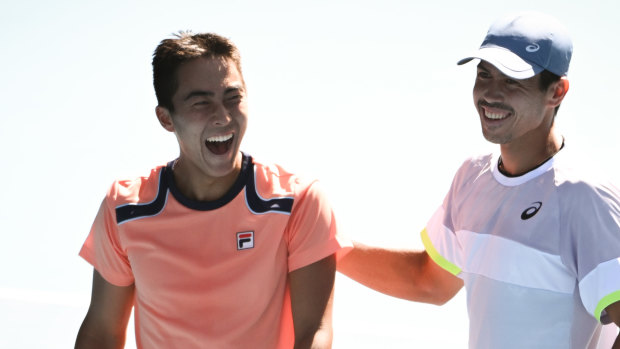 Their Melbourne Park run is every bit as unlikely as that of Kyrgios and Kokkinakis, so it was fitting they beat the same opponents, Marcel Granollers and Horacio Zeballos, on Thursday in the semi-finals as their countrymen did 12 months ago.

It came a day after they dropped only four games in eliminating the top seeds.

Hijikata sealed the 6-4, 6-2 win over the No.8 seeds with a straightforward volley winner on top of the net, and the smile has not left his face since.

“I’m pumped. I wouldn’t have picked it at the start of the week,” Hijikata said.

“I’m just trying to soak it all in. I just can’t really believe it, to be honest.”

The 21-year-old approached Kubler about six months ago to see if he would play with him at the Australian Open, almost a decade after the then-wannabe pro wandered down to the North Shore Open to watch his future doubles partner in action.

Kubler, now 29, was fresh off being the best junior in the world at that stage and had the tennis world at his feet, not knowing all the challenges, particularly with his knees, he would face in the coming years.

He made the mixed doubles final with fellow Australian Jaimee Fourlis in 2022, but hopes to go one better and win the title this time around.

“Just the thought that we could, maybe, win is pretty surreal, to be honest,” Kubler said.

“It’s good that we’ve got a day off in between, just so we can probably enjoy this moment a little better and then refocus … but, also, I’m super pumped now for what the future holds.

“Our rankings go up a fair bit now, and we can actually play the other slams together. It’s great that what we are doing here, but now we can look to Roland Garros, to Wimbledon, to US Open, to even Aussie Open next year now.

“There is a new team forming. That’s probably what I’m more excited for.”

The result caps Kubler’s incredible career resurgence, which includes reaching the last 16 in singles at Wimbledon last year and reaching a career-high ranking of No.84.

Hijikata has had a whirlwind few months, himself, winning a set off Rafael Nadal at the US Open last year.

“It’s been a roller coaster of a year,” Hijikata said.

“I think this time last year I was still tossing up whether to go back to college or not. I think I have, maybe, made the right call going on the tour.”