American tennis player Tennys Sandgren has been allowed on to a chartered flight to Melbourne to take part in the Australian Open, despite recently testing positive for coronavirus.

The flight was turned back to the gate in Los Angeles amid confusion over whether Sandgren would be allowed to depart. He tweeted that he had eventually been let on board, but it was not clear whether he was still on the plane when it took off for a second time. Tennis Australia has been contacted for comment. 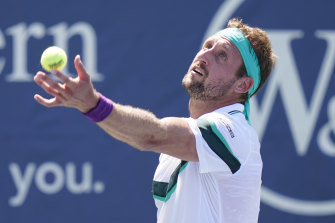 The governing body would not comment on the medical status of specific players but did provide a statement about how testing can pick up cases of COVID-19 shedding.

"Some people who have recovered from COVID-19 and who are non-infectious can continue to shed the virus for several months," a Tennis Australia spokeswoman said.

"Vic government public health experts assess each case based on additional detailed medical records to ensure they are not infectious before checking in to the charter flights.

"Players and their teams are tested every day from their arrival in Australia, a much stricter process than for anyone else in hotel quarantine."

Sandgren tweeted on Thursday that he had originally been barred from the flight because of his positive test, but said later said he had been allowed on board.

"COVID positive for thanksgiving. COVID positive on Monday. Yet PCR tests are the 'gold standard'? At least I get to keep my points," he wrote.

He then tweeted: "Wow I'm on the plane. Maybe I just hold my breath too long … [Australian Open tournament director] Craig Tiley is a wizard."

He later tweeted: "A lot couch virologists out there. My two tests were less than [eight] weeks [apart]. I was sick in November, totally healthy now. There's not a single documented case where I would be contagious at this point. Totally recovered!"

Players and officials were due to begin arriving in Melbourne on Thursday evening to begin a mandatory 14-day quarantine ahead of the tournament in February.