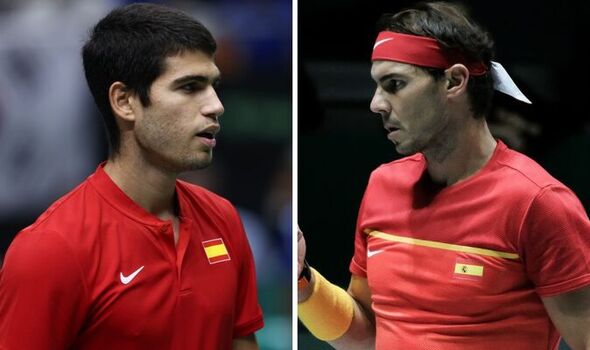 Croatia’s Marin Cilic has claimed that things would have been different if Rafael Nadal and Carlos Alcaraz had appeared in Spain’s Davis Cup Finals squad after the Croats defeated the Spanish team on home soil in Malaga on Wednesday. Cilic and Borna Coric won the opening two singles matches to advance to the semi-final after Roberto Bautista Agut and Pablo Carreno Busta were unable to keep their nation alive.

Spain was left without their top two players for the Davis Cup Finals this week after Nadal opted out of competing in the team tournament this year while Alcaraz got injured at the recent Paris Masters, forcing him to end his season early. And it cost the team as they lost their opening match at the Finals in Malaga, going out to Croatia in the quarter-final.

Coric got the first win of the day, topping Bautista Agut 6-4 7-6(4) before there was a bizarre moment that saw two protestors chain themselves to the net in between matches. Following the incident, Cilic stormed back from a set down and 1-4 down in the final set tiebreak to earn Croatia a spot in the semi-final with a 5-7 6-3 7-6(5) win over Carreno Busta.

It meant the doubles rubber was cancelled as Croatia advanced with a 2-0 record in the tie, and afterwards Cilic confessed that the outcome would have been different had Nadal or Alcaraz been in the Spanish squad as he branded the 36-year-old one of the best Davis Cup players in history. “With Nadal and Alcaraz it would have been very different, you know,” the former world No 3 admitted.

“I mean, Rafa has been like that throughout his career, a leader within the team, with his own results, always enjoying this locker room environment. Playing singles or doubles he is one of the best Davis Cup players, if not the best, in this regard.”

The 2014 US Open champion also said it was tough for Spain to lose world No 1 Alcaraz after he tore an ab muscle in Paris, but told the team that they had to forget about the tough loss. Cilic added: “And then there is Carlos, who has had a fantastic season.

“It’s a shame he got injured in Paris-Bercy, he couldn’t play the ATP Finals in Turin either, so it’s a difficult situation for both of them. Now Spain has to look to the future, it cannot think about that.”

Croatia will now face Australia with the first semi-final at the Davis Cup Finals officially confirmed after the Aussies downed the Netherlands on Tuesday. While Nick Kyrgios – their No 1 player in both singles and doubles – is not part of the team, even the world No 22 himself confessed that Australia’s squad was so strong that they could go all the way.

“It is a team that is always incredibly energetic, very young players and always excited. We already had a tough battle against them last year, so we will have to get our energy back for this duel as well. I’m sure it will be a great battle,” Cilic said, looking ahead to the clash against the likes of Alex de Minaur and Thanasi Kokkinakis.