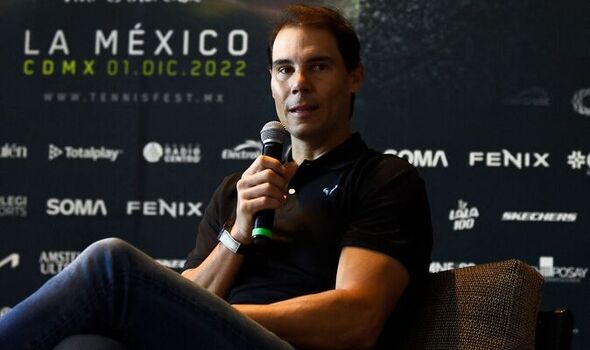 Rafael Nadal has shared a positive update on the state of his body after picking up multiple injuries in 2022. The world No 2 was able to start the season by winning the first two Grand Slams but battled problems with his foot, rib and abdomen as he played just four events after Wimbledon in July.

Nadal has spent parts of 2022 finding himself setback by multiple injuries despite a successful year that saw him break the record for most Grand Slam singles titles won by a man. The Spaniard started the year by coming back from a four-month injury layoff and went on a 20-match winning streak, spanning titles in Melbourne, Acapulco and the Australian Open.

But his first injury set in during the Indian Wells final as he lost to Taylor Fritz and it was later revealed that the 36-year-old had broken his rib, forcing him out of competition for six weeks. When he returned, the foot injury that ended his 2021 season early began playing up again but he underwent successful treatment ahead of Wimbledon, where he then sustained a 7mm abdominal tear and tore the muscle a second time before the US Open.

After what has been an injury-prone year, the 92-time title winner has now shared a positive update on his body as he claimed it would not prevent him from playing as he eyed another strong season in 2023. “For me the main thing right now is to be able to get to the important tournaments in full physical condition,” Nadal said during his South American exhibition tour, which concluded in Mexico on Thursday.

JUST IN: Tsitsipas let down his fans with attempt to U-turn on feminist spat

“I continue to enjoy day-by-day and I continue to have goals that excite me at a professional level. I’m going to try to achieve them until my body or mind says enough. At the moment, that hasn’t happened so I want to continue,” he added, hinting that retirement was still a way off.

“I am happy doing what I do, I love competing on the big stages and the love of the people encouraged me to continue.” But one part of Nadal’s career may have come to an end – his time playing in Mexico.

The world No 2 has often frequented the Acapulco ATP 500 in the period of the season between the Australian Open and the sunshine double at Indian Wells and Miami, even winning the title earlier this year. But he told fans that his exhibition appearance on Ruud would likely be the last time he played in the country.

Nadal confessed: “It will most likely be the last time I play in Mexico, Acapulco 2023 is not on my calendar and the 2024 season seems far away. Now is the time to enjoy this moment to the fullest and play in an emblematic setting, with many people and in a country where I have always felt loved.”