Rafa Nadal lost his first Grand Slam match of the year as he suffered a shock defeat to home favourite Frances Tiafoe at the US Open. The Spanish superstar won the Australian and French Opens – and pulled out injured before his Wimbledon semi-final.

The No.2 seed had become the new tournament favourite after defending champion Daniil Medvedev went out to Nick Kyrgios.

But Nadal’s bid to win his 23rd Grand Slam title was ended in sensational style by smiling assassin Tiafoe 6-4 4-6 6-4 6-3. He won the final five games amid deafening noise under the roof in the Arthur Ashe Stadium.

It was the biggest win by an American man at the US Open since wild card James Blake upset then-No.2 Nadal in the 2005 third round.

Tiafoe failed to even take a set off the Spaniard in their previous two meetings in the 2019 Australian Open quarter-finals and 2019 Madrid third round. 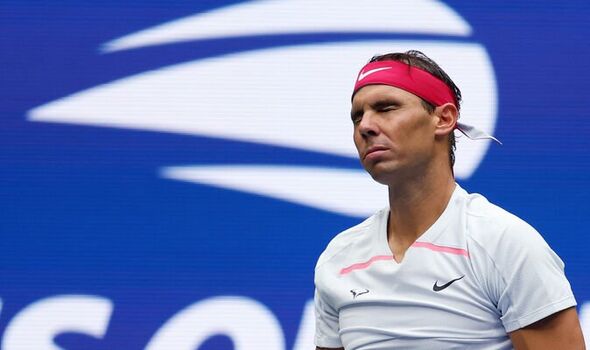 But the world No.26 put that stat right by claiming the first set in 54 minutes – the third time Nadal had lost the opening set in his four matches here.

The Spaniard then disappeared for a medical timeout – play was held up for over nine minutes as umpire Carlos Bernades phoned to query where he was – and he returned with both wrists strapped.

The tight second set turned in the final game when Tiafoe left a Nadal forehand which clipped the line to go 15.30 down – and he served a double fault on the Spaniard’s second break point.

But the American set up a set point in the second set with another outrageous forehand winner – and then took it with an ace. 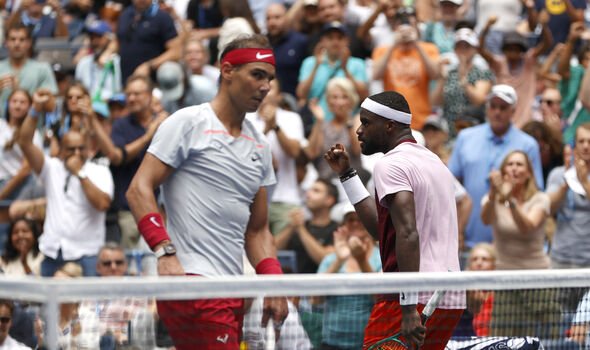 This time both players left the court for nine minutes. With rain in the air in the fourth set, Tiafoe was not pleased to be told to keep playing while the noisy retractable roof was closing

He missed a horrible overhead at 15-30 in the fourth game to give two break points and Nadal broke to lead 3-1. He was then given a code violation for swearing when he told Bernardes: “I am tossing the ball and I can see the ******* thing closing.”

But Tiafoe then won four consecutive games to lead 5-3 – and made it five when he took his second match point when Nadal carved a backhand into the net after three hours and 34 minutes.

Nadal, 36, had reached the quarter-finals or better in 17 consecutive Majors he has played in since Wimbledon 2017.

The Spaniard, playing here for the first time since his fourth title in 2019 his fourth, can still return to world No.1 for the ninth time at the end of the tournament if Carlos Alcaraz and Casper Ruud fail to make the final.