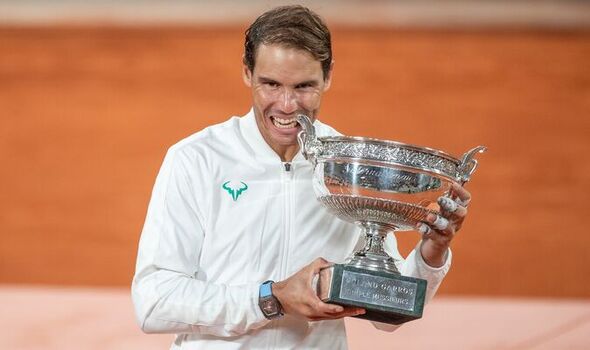 Rafael Nadal has been told he could pass Margaret Court’s all-time Grand Slam record ahead of the French Open. The world No 4 broke the record for most Major titles won by a male singles player at the start of the year by winning his 21st and is now four away from surpassing Court for the all-time record.

Nadal was hoping to win a record 21st Grand Slam title at last year’s French Open but his run was halted by Novak Djokovic in the semi-final. The Spaniard still managed to clinch the record in Melbourne this year and is now hoping to extend his lead in Paris by claiming the trophy back from the world No 1.

And 18-time Grand Slam singles champion Martina Navratilova has now admitted she can see the Spaniard surpassing Court’s all-time record of 24 Majors, which spans the pre-Open Era. The Australian holds the record while Serena Williams sits one behind on 23 Grand Slams, the record for the Open Era, and Nadal could supposedly surpass both to hold 25.

Asked whether it was possible for the 35-year-old to end his career with the all-time record, the retired legend told Eurosport: “It can be. He’s still playing.” But she also admitted she didn’t know “how long it will take” the Spaniard to potentially reach the milestone, “because tennis is very exhausting”.

Nadal played just two matches for the rest of the season after losing to Djokovic in Paris, as he was sidelined by a chronic foot injury and underwent a medical procedure. The world No 4 then returned in Melbourne this year and went on a 20 match-winning streak, winning the ATP 250 there before lifting the Australian Open trophy and picking up the Acapulco title a few weeks later.

He then fractured his rib during his Indian Wells semi-final victory over Carlos Alcaraz and lost the final to Taylor Fritz the following day, taking six weeks out to recover from his fresh injury afterwards. He returned in Madrid last week and lost to Alcaraz in the quarters, and is now playing in Rome as his last tournament before the French Open.

And Navratilova was also impressed by the 10-time Rome champion’s ability to keep coming back from injury, as she said: “He’s got injuries, but he always comes back, with a broken rib, and he’s back, he’s Superman, he should be wearing a cape, he seems resilient.”

The 167-time singles title winner also branded him a “great role model” for his latest conqueror Alcaraz, as the teenager has won two Masters 1000 titles since losing to his compatriot in Indian Wells and broken the top 10. “I think Nadal does a lot for young people. He never thinks anything is lost and that’s important for the stars of the future so they can establish themselves,” she added.