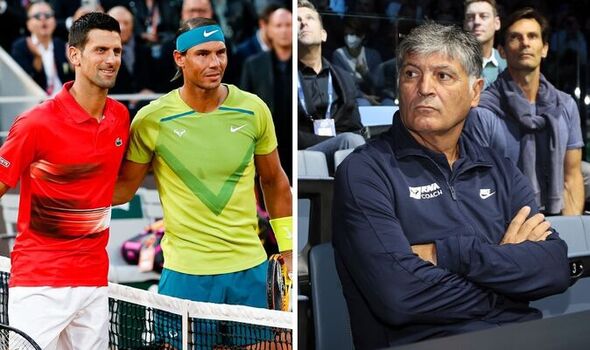 Toni Nadal has given his verdict on who will become the next young player to threaten the dominance of his nephew Rafael Nadal as well as Novak Djokovic. Despite coaching Felix Auger-Aliassime, the Spaniard admitted that he thought it would be Casper Ruud who would ascend to world No 1.

Toni Nadal has had a successful coaching year despite no longer working with his nephew, as his new charge Auger-Aliassime enjoyed the best season of his young career by winning four titles – including three in three weeks – as well as reaching the world’s top 10 and making his ATP Finals debut. But the uncle of Rafael Nadal has been lauding praise on another young player as he tipped current world No 4 Ruud to ascend to the top of the rankings.

The 23-year-old is an alum of the Rafa Nadal Academy in Mallorca, where he worked under Toni as one of the pupils at the coaching school. And Ruud also had a career-best season in 2022 as he reached two Grand Slam finals at the French Open and US Open, rising to a career-high of No 2 in the world.

Nadal’s uncle now believes the Norwegian can go one further as he explained how Ruud had been able to improve and evolve into a top player. “Casper Ruud, I remember when he came to the academy, he had a bad backhand because, in my opinion, he made bad movements with his legs,” he told Eurosport.

JUST IN: Djokovic shuts down question as he refuses to divulge physical issues

“Now his backhand is good. Back then, I said he needed to change a little. Now watch what has happened with Casper.” The 61-year-old also revealed that Ruud didn’t believe he would able to achieve the heights he has already reached in his young career as he threw his weight behind the nine-time title winner to keep improving.

Toni continued: “Every year, he has improved a little. I remember, when he came to the academy, he never thought that he could be No 2 in the world. Now, I have seen many of his matches and he is a very good tennis player. He can be No 1.”

Explaining why he believed in Ruud, the uncle of the current world No 2 added: “The most important thing in tennis and in life is to improve. Casper has this capacity. Normally he makes things very easy, very simple and not complicated.

“With calmness, he hits the ball very well. When you are alone and on the tour, you have to improve and try to learn.” But the rise of Ruud will only prevent Toni’s nephew Nadal and his biggest rival Djokovic from continuing to battle for the biggest achievements in the sport.

For now, Ruud has not been able to beat either man when he has played them, with Djokovic holding a 3-0 record over the Norwegian while Nadal beat the 23-year-old during their round-robin match at the ATP Finals this week after Ruud had already become the group winner. But by Toni’s predictions, he could join the likes of current world No 1 as a threat to the dominance of the two tour veterans.