That is according to former British tennis star Greg Rusedski.

Federer sealed his place in the quarter-finals of the Miami Open with a dominant display against Daniil Medvedev.

The Swiss needed just 61 minutes on Hard Rock Stadium to beat the Russian 6-4 6-2 and he will play Kevin Anderson on Thursday.

Paganini has been Federer’s fitness trainer since 2000 and the tennis star credits the coach for being the main reason he’s been able to stay at the top for so long.

Speaking after the match, Rusedski and his co-Amazon Prime pundit Daniela Hantuchova spoke about Federer’s remarkable level of play at 37-years of age.

And Rusedski revealed the 20-time Grand Slam champion has put his foot down in stopping his key training methods from being disclosed.

Hantuchova said: “I think it comes down to the fact he’s had the same fitness coach since he started his career. I think it is a huge factor.

“So many times the players try to change things up and do something different. 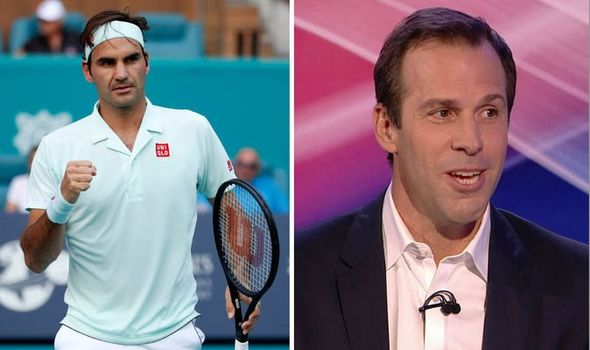 “But nobody knows you better than [someone] you’ve been working with for 20 years.

“So I think that he’s got somebody that knows his body better than anyone is a huge factor here.”

Rusedski then said: “Federer has not allowed Pierre to write a book.

“Federer said ‘until I’m retired nobody is writing about my fitness programme’.”