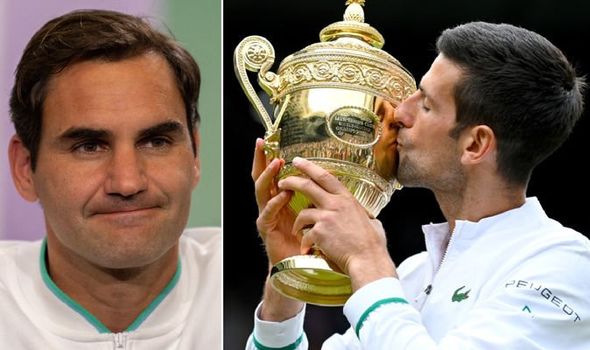 Roger Federer has taken to Twitter to react to Novak Djokovic drawing level with him and Rafael Nadal on 20 Grand Slams. Djokovic saw off Matteo Berrettini in four sets in the men’s Wimbledon final to tie his long-time rivals.

Shortly after Djokovic’s triumph, his sixth at SW19 which brings him two behind Federer at the tournament, the Swiss posted that he was “proud” to be playing alongside the Serbian.

Federer could have met Djokovic in the Wimbledon final this year, as he did in 2019, but was beaten by Hubert Hurkacz in the quarter-finals.

On the other side of the draw, Djokovic saw off Marton Fucsovics in the same round before beating Denis Shapovalov in the semis.

Reacting to the world No 1’s third Grand Slam triumph of 2021, Federer posted: “Congrats Novak on your 20th major.

“I’m proud to have the opportunity to play in a special era of tennis champions. Wonderful performance, well done!”

Speaking after his win, which follows joy at the Australian Open and French Open earlier this year, Djokovic declared: “It means none of us three [Federer and Nadal] will stop. I think that’s what it means.

“I’ve mentioned this before many times and I have to pay a great tribute to Rafa and Roger.

“They are legends of our sport and they are the two most important players that I ever faced in my career. They are the reason why I think I am where I am today.

“They’ve helped me realise what I need to do in order to improve to get stronger physically and tactically.

“When I broke into the top 10 for the first time I lost for three-four years most of the big matches that I played against these two guys.

“Something shifted end of 2010 and last 10 years has been an incredible journey that is not stopping here.”

The 34-year-old added of coming out on top for the sixth time at the All England Club: “Winning Wimbledon was always the biggest dream for me when I was a kid.

“A seven-year-old boy in Serbia constructing a Wimbledon trophy with improvised materials and standing here with a sixth real trophy is incredible. It is amazing.”

For the latest news and breaking news visit:/sport/football