Home » Stuck in the mud: Lack of red dirt has hurt Australian tennis

Ashleigh Barty’s breakthrough in Paris two years was not only a wonderful personal achievement, it also represented Australia’s end to a near 50-year period without producing a Roland-Garros singles champion.

World No.1 Barty’s exceptional all-surface game and Sam Stosur’s excellent results in Paris aside, it’s been slim pickings in recent decades for Australia on the dirt, especially in Europe where clay has exalted status. 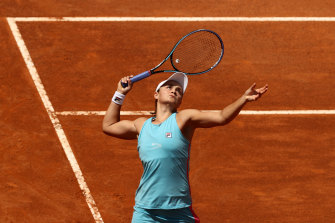 For former Australian doubles champion and former Australian Open tournament director Paul McNamee, a passionate supporter of clay’s virtues, he believes that learning a player’s skills on the red dirt is fundamental.

It’s not a coincidence that Australia’s focus on other surfaces – including the omnipresent en-tout-cas option made of crushed bricks and stone, as well as synthetic grass – have contributed to the nation’s recent returns.

“The lack of getting juniors onto clay as the primary development surface is the reason,” says McNamee.

“Basically, Australia has taken a long time to wake up. The reality is, you know, 75 to 80 of the top 100 men in particular, are from Europe. It’s not coincidental. They develop on the best surface, which is clay.”

It’s not a newly recognised phenomenon for local tennis officials. In the 2000s, decisions were made to re-prioritise and re-invest in clay courts.

According to Tennis Australia statistics, Australia had just one “tier one” claycourt facility in the late 1990s. That has since expanded to 68 facilities nationwide, with the majority of modifications or improvements happening since 2012.

Nearly 30 tier-one clay courts have been installed at national academy venues while anyone who visits the Royal South Yarra Tennis Club will see four recently installed “Har Tru” green clay courts, the surface that was briefly used by the US Open in the mid 1970s.

“In the last few years, Tennis Australia have done a lot to address that by putting in the red clay at Melbourne Park, [courts] in Brisbane, Sydney – they’ve endeavoured to address [the problem], there’s no question,” said McNamee. 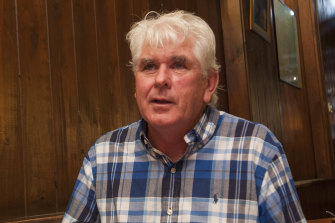 Paul McNamee says Australian tennis is playing catch-up when it comes to clay.

“Ash Barty is a function of addressing that because she’s spent a lot of time on the clay in Brisbane, which she wouldn’t have done five years before that.

“The timing was good for Ash really.”

Such is McNamee’s passion for clay that he has penned a book – Welcome To The Dance – a personal ode that charts his own personal path in growing to love the surface.

McNamee explains how he went from an 18-year-old visiting Europe for the first time in the early 1970s – and bringing virtually zero experience on clay – to taking the next seven years to embrace the surface. His first match at Roland Garros – against a 40-something veteran from Bolivia – was a rude shock.

“I thought I’d start out with my own game plan with an element of surprise. I would show him a bit of old school Aussie serve and volleying,” McNamee writes.

“His response was to taunt me with deft returns to my shoelaces, following up with diagonal lobs to unreachable positions.”

McNamee lost badly and was humbled. But he turned things around.

Like countless other Australians, McNamee didn’t grow up on “true clay”, instead spending his formative years playing on en-tout-cas – an experience that’s “not the same”.

“It’s decent [but] it’s dry, it’s got bad bounces, you can’t play in summer, it doesn’t replicate clay – either European or American clay,” he said.

“When you haven’t got confidence on the bounce, you can’t develop your baseline game, so you end up serve-volleying.

“The reality is in the modern game you’ve got to be able to rip it from the back. You can’t do that with confidence on en-tout-cas, so it’s inferior – can I just call it that?”

McNamee’s message is virtually repeated by Australia’s former world No.4 Samantha Stosur, a four-time semi-finalist in Paris and runner-up 11 years ago.

“I think it’s a great surface to learn on,” said Stosur. 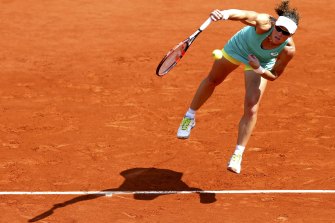 “I never really played on it that much. Then when I was 15 I went to Europe for my first trip and played on it for six weeks – had no idea what I was doing, and hated it!”

Stosur’s results weren’t automatic, nor quick. The reduced strain on the joints, and the art of learning to slide, are among the benefits, she says.

“I just think it [clay] is a great learning tool – to know how to stay consistent, work the point, to be able to move your opponents, work on your own physicality with sliding. And it’s just easier on the body,” said the 37-year-old.

“You don’t have to be on a hardcourt – [a] cement [surface] – time and time again when you’re a young teenager.

“I didn’t win a match at Roland Garros for five years – and it turned out to be my best tournament almost.

“It did take me a while [to learn clay], but it is doable.

“Some players adapt to it a lot better than others. You’ve just got to trust yourself. The movement is the biggest thing.

“You can have one bad slide – get stuck, fall over, and it kind of puts a bit of hesitation in you. But I think the more you do it, the more you realise ‘OK, you can trust your movement and the sliding, and really use so much of it to your advantage’.”