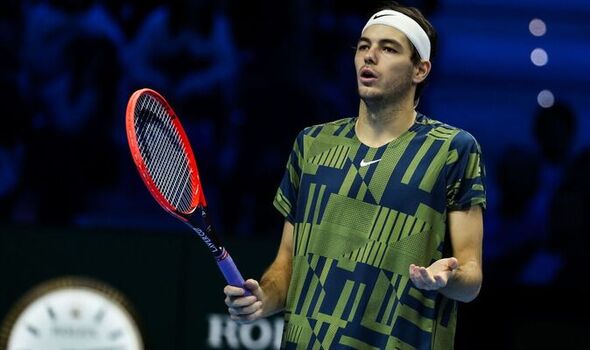 Taylor Fritz hit out after a spectator shouted mid-rally while he was serving for the second set. The American was ultimately broken and lost to Novak Djokovic 7-6(5) 7-6(6) in the semi-final of the ATP Finals, and he has now branded the fan’s actions as “disgusting”.

Fritz’s ATP Finals debut came to an end in the semi-final as the world No 9 lost to five-time former champion Djokovic in two tiebreak sets. The 25-year-old just failed to qualify for the tournament but made it in the draw when world No 1 Carlos Alcaraz pulled out injured and made the most of his last-minute entry as he made the semi-finals after going 2-1 in his group matches.

The eighth seed faced Red Group winner Djokovic in the semi-final and was able to get an early break in the second set after just losing the first, and found himself serving to force a decider at 5-4. But at 30-30 a spectator could be heard making a noise in the crowd as Fritz dumped the ball into the net to give his opponent a break point, which the Serb converted before winning the match in a tiebreak.

And Fritz has now slammed the member of the crowd for “deliberately” interfering with the point as he was left frustrated following the one-hour-and-54-minute battle. Looking back on his debut at the season-ending championships, he said: “I mean, now is probably not the best time for me to give a good answer for the reflection of the week because I’m extremely upset about the match, more so about the things that happen in a match that I can’t control.”

JUST IN: Federer lifts lid on biggest tennis realisation he made after retiring

The four-time title winner was then asked if he was talking about the “inadvertent noise” and replied: “Yeah, the person purposely trying to mess me up, yeah.” Fritz was then questioned on his comments again, as he was asked whether players “frowned upon” intentional interferences whether or not it benefited them and whether anything could be done to stop it.

“I can’t expect anybody to be like, Replay the point. In that situation, I can’t say that I would do that either. I can’t expect anyone to do anything differently.” But Fritz admitted he was still left unhappy as he claimed he was “screwed” by the spectator while serving for the set as he explained there was a difference between making noise and deliberately putting someone off.

“I don’t know. I don’t know what to say. I think that’s what makes it even more frustrating. It’s like, you know, I kind of got screwed and there’s nothing that really can be done about it,” he added.

“You get used to playing in absolute silence your whole career. It’s normal that the crowd maybe makes a noise when there’s a crazy point going on. You expect it, you’re ready for it. But someone just, like, flat-out screaming to purposely try to throw you off, it’s not something you’re ever used to. When it happens, it’s an absolute shock. It’s disgusting then.”