A significant threat to the quality of international names competing at the Australian Open has been avoided, after players secured permission to practice during 14-day quarantine.

With the first grand slam of the year most likely to begin a couple weeks late on February 1, players will be able to arrive in Australia at the end of the first week of 2021 and train while separated from the community. 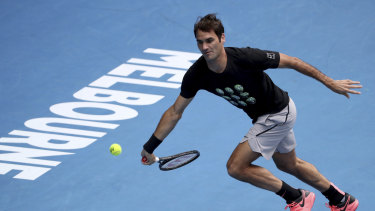 However, one source with knowledge of the discussions around practicing in quarantine said the players will still be expected to "strictly adhere" to rules put in place by Tennis Australia and the Victorian government.

The ability for players to practice in quarantine has been one of the most complex aspects of negotiations involving Tennis Australia, the Victorian government and the ATP and WTA tours over the past week.

Victoria recorded 28 consecutive days of no new coronavirus cases on Friday, and the government has been focused on holding the tournament and appeasing players but also ensuring the virus does not re-appear after a long winter in lockdown.

Players were told on Friday of the development, while it was also made clear there would be restrictions on how many support staff they could bring with them.

Cancelling the traditional Australian Open qualifiers remains a possibility, as does the tournament beginning on January 25, only one week later than scheduled.

Starting the tournament only one week later instead of two would better appease broadcasters and a host of international tournaments planned for February.

While players know they can practice in quarantine few details have emerged about where they might stay for their 14-day stint in isolation, or about where they would be allowed to practice.

Government sources had hoped a decision on the timing and restrictions around the summer of tennis would be available by Friday however tennis sources said there was still more detail to be worked through, as not even the date of the tournament had been set in stone just yet.

Australian player John Millman is currently in 14-day isolation and said this week that it would be almost impossible for players to compete in a grand slam after two weeks of no practice.

"You just can’t do a two-week hard lockdown to get ready for an Australian Open. I don’t think any of the international players would do that. Your body is what pays the bills. You are an injury risk, you can’t go from zero to 100 right away, that’s the biggest risk," Millman said.

"If the government decides they just can’t take that risk, the tournament probably won't go ahead. That's how I see it. With a hard lockdown, I just don't see how the players would buy into that after what they have been exposed to for much of the year and how tennis works if we had to go down that path."

The Australian Open junior tournament has been cancelled while the ATP Cup – which successfully replaced the Hopman Cup in 2020 – will not take place.

Lead up ATP and WTA tournaments will likely still take place in between quarantine ending and the grand slam beginning so players can tune up.

Players had originally expected to be allowed to fly into Australia in early December and complete quarantine but this was knocked on the head by the state government.