Wimbledon quarter-finalist Ajla Tomljanovic has opened up about her bond with tennis royalty Chris Evert on a day she was told the title was there for the taking.

Tomljanovic, the native Croatian, Florida-based Australian who applied for local citizenship in 2014, completed one of the toughest wins of her career on Monday to topple giant-killing Frenchwoman Alize Cornet 4-6, 6-4, 6-3 and set up a meeting with 17th-seed Kazakhstani Elena Rybakina.

Having become the first Australian woman to reach the final eight for the second year in a row since Jelena Dokic 22 years ago, Tomljanovic, who lost to eventual champion Ash Barty last year, was in tears after a gruelling match that lasted 2 hours, 35 minutes, as she couldn’t believe she had again advanced to this point. 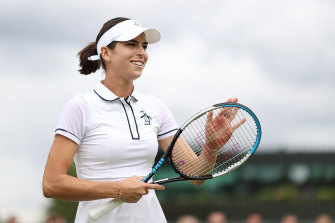 Ajla Tomljanovic is through to the Wimbledon quarter-finals for the second year in a row, but this time has greater confidence in her game.Credit:Getty Images

Tomljanovic, 29, quickly had to check with her father, former coach and fitness trainer Ratko, to ensure he had booked another night’s accommodation. Since the second round, the Tomljanovic family has had a day-to-day booking, but the robust right-hander says she is not going to jinx her work to date by booking for an extended period.

She was also on the phone with Chris Evert, the legendary 18-time grand slam champion who has become her mentor and friend. Evert has battled ovarian cancer this year, but her determination to help Tomljanovic has not waned.

“Actually, over the past few months we’ve been talking more than ever. She’s been there for me, like, this year a lot. It’s been so nice,” Tomljanovic said.

“I kind of felt at one point bad. She was going through something, if you want to talk about problems in life, that’s something that’s scary. I remember one time telling her: ‘oh, my gosh, I don’t want to bother you with my problems because you’re doing something way harder’. She’s like: ‘no, no, I love, in a way, the distraction’.

“We love each other, so we were there for each other in that way. She texted me before the match that she believes in me.”

Tomljanovic has dealt with self-doubt through her career, and has been open about this publicly. That was clear again in her post-match press conference, and even in her chat with Evert.

“She repeated, like, three times: ‘Ajla, you’re in the quarter-finals again,’” Tomljanovic said.

“I think she repeated it, like, because I wasn’t saying much, I was just kind of laughing at her. She just kept saying how happy she is for me. I said something like ‘can you believe I’m here after, I don’t know, a couple months ago, the conversations we were having’. 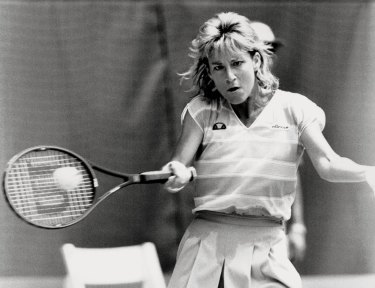 “She said, ‘no, I actually do believe that you’re here because you always work hard’. Like one of the hardest workers that she’s seen, but there was always something missing for that extra step.”

That extra step appears to have been taken. Former Australian tennis star and current commentator Wally Masur has seen Tomljanovic mature from the time she was invited into the Tennis Australia program – with far more resources on offer than what Croatia could provide – by TA chief Craig Tiley.

This came after a secret hit between David Taylor, who had coached Sam Stosur, and Tomljanovic, then ranked 78th in the world, rubber-stamped the decision to move to Australia, where Masur said she already was well-liked by the local players.

Masur, who three times made the fourth round at Wimbledon, said Tomljanovic continued to build. 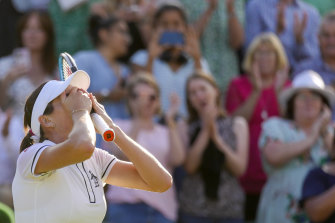 Tomljanovic celebrates winning through to the quarter-finals.Credit:AP

“It’s interesting because she is such a good player but has given away a few hints that there is a bit of self-doubt there, which on the surface there shouldn’t be, because she really has game,” Masur said.

“She is really fit, she works hard, taking care of a lot of elements of the game. Hopefully, that self-belief is building because the women’s draw is pretty open. She has a tough assignment, there is no question about it, but the way the women’s draw is unfolding, anybody is a chance who can grab the moment.”

And the Evert connection cannot be underestimated.

“It’s not bad, is it? That’s someone who knows how to navigate a grand slam tournament,” Masur said.

“I guess that speaks to Ajla’s base down there in Florida. Obviously, that is where Chris spends her time. That’s really positive.”

Tomljanovic was the Croatian No.1 when she made the call to join Tennis Australia. She was dubbed a traitor by some in her homeland, so overcoming adversity has been a strength. However, on the court, it’s been a conservative style of play that has, at times, held her back. But the world No.44 believes she has unlocked the vault.

“I had to learn, when I was coming through, I had to learn to take more risk and not look at it as risk, because I have big shots, I’m a big girl, so I’m not going to be running behind the baseline,” she said.

“I think I have a powerful game, but I have the ability to go back into maybe playing a little more conservatively, which can kind of benefit and hurt me at times.”

As Masur says, the challenges continue to come. Rybakina reached the French Open quarter-finals last year, when she made the fourth round at Wimbledon in her first appearance at the All England Club.

“I feel Ajla is at her best when she is winning the arm-wrestle and can get on the front foot. She has got this tremendous ability to smash a backhand down the line and, likewise, with the forehand, and that’s really hard to defend against,” Masur said.

“Rybakina is six foot tall, she is big and strong, and she just crushes it … you have got to defend when you have to and, hopefully, you can control your share of the points.”