Home » Tennis » ‘The guy is a genius’: McEnroe elated to finally see best of Kyrgios

New York: Eventful, unpredictable and – in the end – irresistible. That was Nick Kyrgios against world No.1 Daniil Medvedev. Kyrgios’ 7-6, 3-6, 6-3, 6-2 victory broke open the US Open draw, left bookmakers installing him as their tournament favourite, and prompted John McEnroe to hail him “a genius on the court”.

“I am on a high, to see him be this professional,” said the four-time US Open champion. “He’s 27 and potentially there are a bunch of years where he can do his thing, and boy did he do it last night.”

Admittedly, Kyrgios still showed flashes of the ill discipline that has dogged his career. He tossed his racquet twice during the first-set tie-breaker, picked up a code violation for audible obscenity, and later wasted a point by coming around the net post to hit a looping miscue off Medvedev’s racket that would otherwise have landed yards out.

Afterwards, he hinted that if he won a maiden grand slam in New York, he would consider retiring. “It’s not impossible to think that he could do that,” said McEnroe, speaking on Eurosport. “We hope he doesn’t do that because the phrase ‘better late than never’ – that applies to Nick because he wasn’t professional for a long time.

“The guy is a genius on the court, he doesn’t need a coach, he did an unbelievable job tactically.”

In another moment of madness, Kyrgios at one stage whacked a loose ball into the top of the backboard. It was a dangerous move that – if the ball had flown just slightly higher – could have endangered spectators and thus seen him defaulted in a similar manner to Novak Djokovic two years ago. 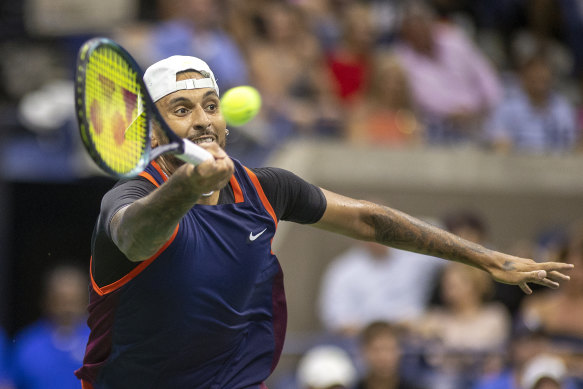 Nick Kyrgios is now the bookmakers’ favourite to win his maiden grand slam at Flushing Meadows.Credit:Getty

Yet it seems churlish to focus on the negatives when Kyrgios also thrilled the fans with his magnificent strokeplay. His repertoire included delicious drop shots, venomous passes and the usual whipcrack serve. Apart from one brief energy lull after the first-set tie-break – which he won by 12 points to 10 – he made Medvedev look limited and pedestrian.

“He played a lot of matches where he wasn’t giving it his all and now you see what he is capable of when he does, when he trains, when he is in shape. The guy is phenomenal,” said McEnroe.

“I’ve said this before, the guy has got one of the greatest serves in the history of tennis. The guy was serving at 70 per cent [points won on first serve] – I don’t think people realise that’s the highest on tour, how big he serves, how good his second serve is – now he is backing it up big time. If he plays like he did on Sunday night, he is going to win the tournament.”

In his press conference, Kyrgios said that he had grown tired of underachieving. “When I was really struggling mentally, I was very selfish. I felt like, ‘I feel bad, I don’t want to play’. Then I looked at the people closest to me and how much I was letting them down, and I didn’t want to do that anymore.

“I was like, ‘I feel like I’ve got so much left to give to the sport’. I just trained hard. I just put my head down. Look, let’s get in better shape, first of all. Obviously winning helps. I’ve been winning a lot this year. The motivation has been there. It’s easy to train. It’s easier to wake up when things are going great.

Watch every match of the US Open streaming ad-free, live and on demand on Stan Sport, with centre court matches available in 4K Ultra HD.