Paris: World No.1 Ash Barty has managed to play through an injury problem and stave off an upset against American Bernarda Pera with a 6-4, 3-6, 6-2 win in her opening match of the French Open.

Returning to the Philippe Chatrier court on Tuesday after her maiden grand slam win in 2019, the 25-year-old Australian seemed to be cruising against the 70th-ranked Pera when she was up 5-2 in the opening set. 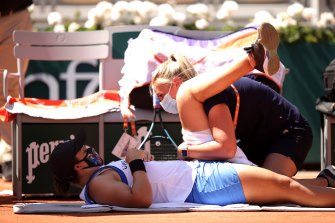 Barty, who skipped the clay court grand slam last year amid the COVID-19 pandemic, started moving sluggishly thereafter, clearly bothered by an injury, and then took a medical timeout at the end of the second set after Pera levelled the match.

The Australian, who started the match with a heavily strapped left thigh, kept fighting and found a way to victory and a second round meeting against either Magda Linette of Poland and Frenchwoman Chloe Paquet.