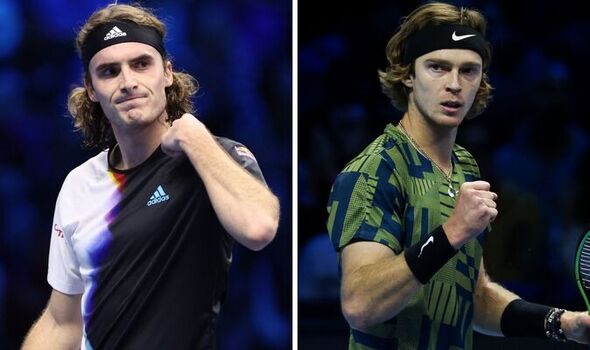 Stefanos Tsitsipas received a classy response from Andrey Rublev after slating the Russian’s game when he lost their round-robin match at the ATP Finals on Friday. The world No 7 came from a set down to reach his maiden semi-final at the season-ending championships and Tsitsipas later made a salty comment as he claimed Rublev had “few tools”.

Tsitsipas’ season ended in defeat on Friday as he lost to Rublev in the final round-robin match of the ATP Finals, leaving Turin with a 1-2 record in the group stage. The pair had been playing for the last spot in the semi-final and it was the Russian who made it out of the group stage for the first time in his three appearances at the year-end finals as he came back to win 3-6 6-3 6-2.

The second seed was clearly unhappy with the outcome as he was quick to take a dig at his opponents game in his post-match press conference, saying: “It’s a shame. I feel like the better player. I felt like I could do more with the ball today. I felt like I could just be much more creative. I don’t even have to say that. I think it’s quite obvious.

“But, yeah, he prevailed with the few tools that he has. He was able to really take advantage of them and win today.” Fans were quick to take note of the 24-year-old’s backhanded compliment as he claimed his opponent had few weapons in his game, and it wasn’t long before Tsitsipas’ words were put to Rublev in his own press conference.

But the 12-time title winner was full of class as he responded, breaking down their respective games by each shot. “I mean, I don’t know if I have few tools or not,” the 25-year-old said.

And Rublev also conceded that Tsitsipas was the better player on paper as the man with the higher ranking, though noted that they had often played tight matches in their ten meetings before the ATP Finals clash on Friday. “Obviously he’s better player because he’s higher ranked and he achieved better results. It’s obvious. There is no doubt,” he admitted.

“But I don’t think that I beat him because of few tools. If you take our match, every match, we have tough battles. This year I lost to him twice in three sets, and now I beat him in three sets. We always have some tough matches. Only one final in Monte-Carlo that he played really well and he destroy me quite easy, but the rest was always tough matches.”