Home » Tennis » US Open 2021 LIVE: Medvedev puts the heat on Djokovic by claiming the first set

Djokovic was pushed hard but managing to hold serve. Medvedev was seeing his moment and the Serbian knew was at stake. It’s hard not to envisage that the second set might decide the match. Medvedev will be well placed at two sets to love up, but does anyone really think Djokovic won’t win if he doesn’t win this set? 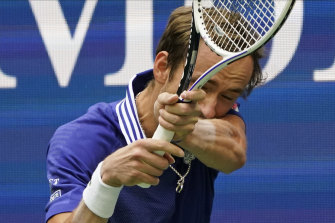 Medvedev returns a shot against Djokiovic.Credit:AP

Medvedev bounces back from 0-40 down to hold serve. Just stunning really. Medvedev is in the groove and, just then, wasn’t rattled by his predicament.

The Russian, remarkably, already has 10 aces for the match. Can he serve Djokovic off the court today?

“The historic moment has arrived for Novak Djokovic. Some time very soon, the world No.1 is going to affirm his record as the most successful male tennis player of all time, probably the greatest male or female, and well in the argument for the outstanding individual athlete of any kind, ever,” writes Malcolm Knox.

“The accolade comes, often, through gritted teeth and with watering eyes. Djokovic’s greatness is acknowledged, what’s more, by the millions who have stopped watching tennis because they can’t stomach him. Nobody has done more in their sport while doing less for their sport. It’s a bizarre but compelling legacy.”

Djokovic starts the second set impressively. Important for him there to get an easy service game, and he did

A brilliant service game from the Russian. He’s here to play.

Medvedev is serving at 65% but, most importantly, he has a 100% record (15 points won) on first serves. If he keeps this pattern up, watch out!

Medvedev won 31 points to Djokovic’s 25 in the first set. 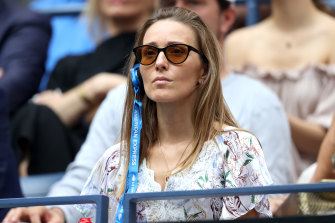 Another hold from Djokovic … a fascinating game there. Medvedev keep trying to put the heat on Djokovic but the world No.1 was having nothing of it. Time now for the Russian to serve out the opening set and set up a memorable final.

Well, well, that was a quick-fire service game from the Russian. The opening set is within sight …

After 25 minutes on court, world No.2 Medvedev is still up a break after pouncing on Djokovic’s serve in the opening game.

Federer the popular pick so far