Home » Tennis » What Novak Djokovic, Emma Raducanu and other top stars have said about playing Wimbledon 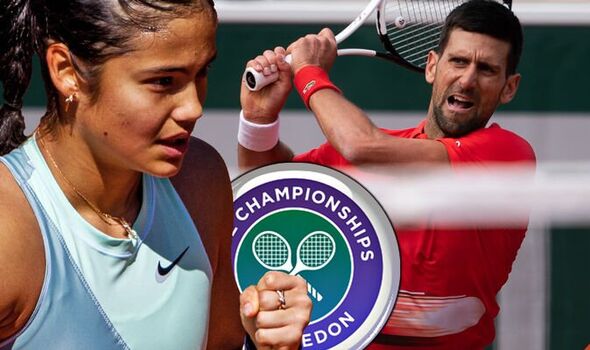 Wimbledon has been the talk of the town over the last week despite the French Open currently being played in Paris. After the tournament banned Russian and Belarusian players from competing this summer, the ATP and WTA Tours responded by stripping Wimbledon of all ranking points on offer at the tournament in separate statements last Friday. Several players, including the likes of defending champion Novak Djokovic and British No 1 Emma Raducanu have since spoken out on the move and whether they will still compete without the ability to boost their ranking.

Since the ATP and WTA confirmed they were removing ranking points awarded at The Championships this year, several players have come out to say they weren’t consulted by the tours over the decision. And many have taken issue with the decision to remove the 2021 points too, which will cost the likes of Djokovic his world No 1 ranking while others will fall down the standings. Express Sport takes a look at what the top players have said about the news over the last few days.

The world No 1 hit out at having his points taken away for a second time this season after being deported on the eve of the Australian Open back in January, and claimed Wimbledon’s decision to ban Russians and Belarusians was “wrong” but committed to playing. “I’m affected because I’m not able to defend 4,000 points [in Australia and Wimbledon],” he said at the Roland Garros mixed zone earlier this week.

He also agreed with the ATP’s stance, adding: “But I’m happy to see that the ATP and the players decided to show Wimbledon that when you make a wrong decision, there are consequences. Wimbledon is still Wimbledon, it was my dream as a kid, I never looked at it for points of prize money, but I understand the group of players affected. It’s a lose-lose situation.”

The world No 12 made her Grand Slam debut at Wimbledon last year as the 338th-ranked wildcard and reached the second week, and said she would be back in SW19 this year no matter what. “I think that it’s definitely a pretty sad situation for all of the players. When we are out on the court, it’s still the same, you still want to win and nothing is going to change in that sense,” she said at the French Open.

The world No 5 will not be affected by the decision to remove points from last year’s tournament as he was unable to play due to his chronic foot injury. Commenting on the decision, the ATP Player Council member said: “I don’t have a clear opinion. There is always a board or a person making decisions and all players have to follow. Every player have a different opinion about all matters and in this world we need somebody to make decisions. Doesn’t matter if I agree.”

Murray blasted the idea of not competing purely because of the removal of points in a Twitter rant on Wednesday. “I follow golf very closely and have no idea how many ranking points the winner of the Masters gets. Me and my friends love football and none of us know or care how many ranking points a team gets for winning the World Cup,” the former world No 1 wrote.

“But I could tell you exactly who won the World Cup and the Masters. I’d hazard a guess that most people watching on centre court at Wimbledon in a few weeks time wouldn’t know or care about how many ranking points a player gets for winning a third round match, but I guarantee they will remember who wins. Wimbledon will never be an exhibition and will never feel like an exhibition. The end.”

The former world No 1 was one of the first players to admit it was unlikely she would compete without the incentive of building on her ranking, which has dropped to No 38. “I would say like the decision is affecting my mentality going into grass. I’m not 100% sure if I’m going to go there,” she said after her French Open exit.

“I would love to go just to get some experience on the grass court, but like at the same time, for me, I don’t want to say pointless – no pun intended -, but I’m the type of player that gets motivated by seeing my ranking go up or stuff like that. So I think the intention was really good, but the execution is kind of all over the place.”

The Russian is one of the players who is banned from competing and will arguably benefit the most from the ATP’s decision to remove the points, as it almost guarantees he will steal the world No 1 ranking from Djokovic. While Medvedev didn’t give an opinion on the removal of points, he said he understood the ATP’s statement on the decision better than Wimbledon’s initial statement on the ban.

“About the ATP decision, it is not easy to comment. But when I read the Q and A from the ATP, why they made this decision, because they are explaining themself, they are not just saying: ‘Okay, we decided that.’ I found it very logical what they say at least. This is what I didn’t find in Wimbledon explanations,” he said. And on the potential of becoming world No 1 as a result, he added: “Very strange. I need to be honest, but I’d be really happy to play Wimbledon. I love Wimbledon. I love playing on grass. I will play on grass after Roland Garros.”