Home » Tennis » You’ve got to be Djok-ing: de Minaur mauled in a ruthless display

So much for Novak Djokovic, maybe, being vulnerable.

After a competitive start, the nine-time king of Melbourne Park broke Australian hearts with a devastating 6-2, 6-1, 6-2 fourth-round romp over an outmatched Alex de Minaur that should silence any doubters about his title credentials.

It seems improbable, particularly after Monday night’s scintillating performance, that anyone will stop him this Australian Open fortnight from the ultimate redemption after being booted out of the country 12 months ago. 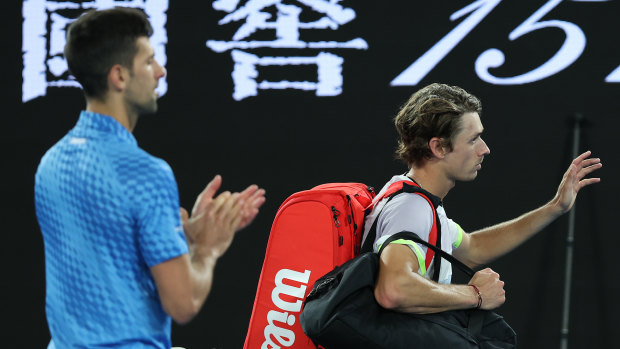 “I cannot say I’m sorry that you haven’t watched the longer match, to be honest. I really wanted to win in straight sets,” Djokovic said. 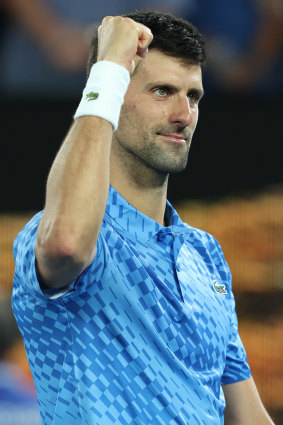 Djokovic was in commanding touch.Credit:Getty Images

“I thought the first four or five games were quite close. One break of serve in the first set [changed everything]. I started feeling, I guess, more loose, more free to kind of go through the ball and be more aggressive.

“Tennis is a very quick, very dynamic sport. Things can change in a matter of moments, matter of points. I kept my focus all the way through [and] just played the best match of this year so far.”

Fifth seed Andrey Rublev, a five-set winner over Holger Rune earlier on Monday, has the unenviable task of facing him in the quarter-finals. The next step in Djokovic’s bold, but achievable, ambition to go down as the greatest tennis player in history is to join Rafael Nadal on 22 grand slam championships, which he could do by Sunday night.

The former world No.1 has left the door ajar for speculation with his comments about the left hamstring he strained in the Adelaide International semi-finals barely a fortnight ago, but there were no signs other than his strapping of any lingering issue.

Perhaps, Djokovic has everyone hoodwinked – or, he might just have a pain threshold mere mortals cannot comprehend, like two years ago when he won title No.9 in Melbourne with a worsening abdominal muscle tear.

“I cannot say I’m sorry that you haven’t watched the longer match, to be honest. I really wanted to win in straight sets.”

“Tonight, it wasn’t obvious I was dealing with an injury. I mean, I didn’t feel anything today. Today, it was great,” he said. “I thank my medical team, my physio, thank God – anybody who really helped me.

“I don’t want to celebrate too early. I’m still in the tournament. I was feeling very good in the first match [but in the] second match, not so great, so I know that things can change really quickly.

“I don’t take anything for granted. I’m really pleased with the way I played and the way I moved today [and] the way I hit the ball.”

For all the talk of de Minaur potentially being able to expose Djokovic’s supposed less-than-optimum movement, it was the Sydneysider who did most of the running.

De Minaur departs the Open in the round of 16 for the second straight year – and again without winning a set. It always looked a tall order for him to become the host nation’s first men’s quarter-finalist since Nick Kyrgios in 2015.

Bernard Tomic, Kyrgios (twice), and de Minaur all made it to the fourth round in the years following without going any further.

De Minaur made short work of his three far-more-modest opponents last week, but it was his defeats of two of the sport’s biggest stars, Nadal and Daniil Medvedev, since November that buoyed hopes pre-match he could cause a titanic upset against Djokovic.

For all the 23-year-old’s lion-hearted ways, he simply struggled to win cheap points – or many points at all – against the might of Djokovic, who won double as many points whenever an extended rally ensued.

Even the mentally tough de Minaur will take some time to recover from this setback, after believing he had made ground on the tour’s pacesetters. That still might be accurate, but Djokovic, as this night proved beyond doubt, is on a planet of his own.

The writing was on the wall when de Minaur struggled through his second service game to tie the opening set at two-all. He did so by winning a series of gruelling baseline exchanges, as Djokovic made him work overtime for everything. That was always going to be tough to replicate all night.

The No.22 seed won only three of the next 19 games, in what was nothing short of a massacre.

It was not for a lack of trying – de Minaur audibly urged himself on and optimistically skipped to collect a ball after saving a break point in the second game of the second set, but it was a brief reprieve. Two points later, Djokovic pounded a forehand into the corner that his young rival could not keep in the court.

“He’s an established top-five, top-10 player already for a few years,” Djokovic said of the Russian.

“[He has] incredible firepower, especially from the serve and forehand corner – just a very explosive player, a little bit like de Minaur, so, hopefully, the result will be the same.”

The last Australian to face Djokovic at the Australian Open, Lleyton Hewitt, was in de Minaur’s corner as usual, and summed up the Serbian superstar’s opening set in one word: “Faultless.”

Hewitt could have said the same thing at match’s end, and in this form, there is an inevitability about how this grand slam will end.