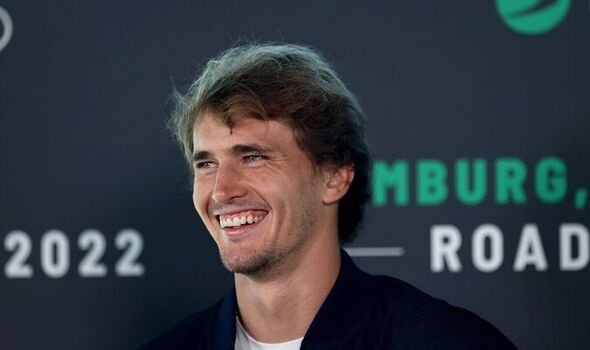 Alexander Zverev says he is ready to achieve “something big” ahead of his comeback at the Diriyah Tennis Cup. The German has not played a match since going down injured at the French Open and has now reflected on his time away from the tour as he prepares to play at the controversial Saudi Arabia exhibition event before returning to professional tennis at the start of 2023.

Zverev has been sidelined for half a year after he went down screaming during his French Open semi-final with Rafael Nadal and needed a wheelchair to be removed from the court, re-emerging on crutches to officially retire from the match. It ended up being his last appearance on a tennis court this season as he underwent surgery for snapped ligaments and a bone edema.

The former world No 2 is now ready to make his mark on the tour after half a year away as he admitted it had been tough to sit on the sidelines after picking up an injury during a Grand Slam semi-final, stopping him from achieving his “lifetime dream” of winning a Major. “For the initial injury. You know, you broke seven ligaments,” he said, recalling the horror French Open incident.

“You need surgery, you need time to heal, but the things that come during and you know, I thought I was going to play for a few months before I did.” The 25-year-old planned to come back during Germany’s Davis Cup tie in September but was instead diagnosed with a bone edema, undergoing more surgery which pushed his return date back even further.

But Zverev has now learned to accept the disappointment of his injury-stricken season, as he continued: “And then obviously all those setbacks you have got to accept. That was a little bit unfortunate but things happen, I can live with it.

“I can live with it as well because it happened during the semi-finals of the French Open while I was trying to achieve a lifetime goal. It didn’t happen snowboarding or skiing or something like that. It wasn’t a stupid accident.

“You know at the end of the day I realised what life without tennis is like now because before that you don’t think about it when you’re travelling 11 months a year you’re just in the tunnel kind of in your way you’re just continuing to do the same thing over and over again.”

With a newfound appreciation for his profession, the current world No 12 is ready to do something big in his comeback after being in arguably the form of his life when he went down injured on the Parisian clay. “You don’t appreciate it,” the 19-time title winner admitted.

“Appreciate playing in front of the biggest stadiums in the world, you don’t appreciate the greatest cities in the world. So that made me miss those things and I think hopefully I’m ready for something new and something big.”