Yoel Romero has been ruled out of his Bellator light heavyweight grand prix clash with Anthony Johnson.

The Cuban, a former UFC middleweight title challenger, made a high-profile switch to rival promotion Bellator, and was immediately included in the organisation’s light heavyweight grand prix.

Romero was scheduled to take on the power-punching “Rumble” Johnson – a fellow ex-UFC fighter who had come out of retirement to reignite his career with Bellator – in the quarter-finals of the 205-pound tournament.

That matchup was set to take place on Friday, May 7 at Bellator 258, but news broke late on Thursday night that Romero had been forced off the card.

In an official statement provided to Express Sport, Bellator confirmed that 44-year-old Romero – the 1999 former freestyle wrestling world champion and 2000 Olympic silver medallist – had failed his routine pre-fight medical screening and was subsequently withdrawn from the event. 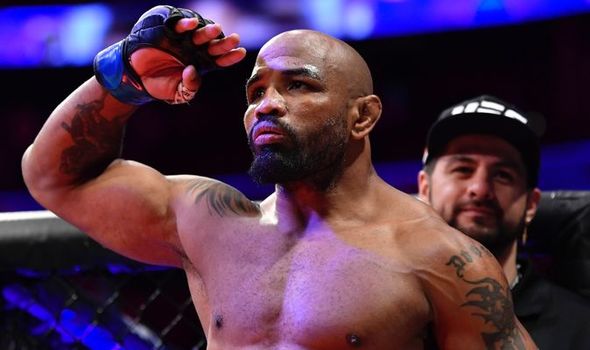 “Yoel Romero did not clear pre-fight medical testing and as a result, his Bellator MMA debut against Anthony “Rumble” Johnson has been postponed,” the statement began.

“Bellator will confirm a tournament alternate to face “Rumble” Johnson in the light heavyweight grand prix as soon as possible.

“Romero will become eligible to reapply for clearance to compete in the coming months, and we look forward to seeing him make his Bellator debut in the near future.

“Bellator MMA will look to reschedule the highly anticipated Johnson versus Romero matchup at a future date.”

Bellator 258 will go ahead, as scheduled, with Bellator bantamweight champion Juan Archuleta putting his 135-pound title on the line against former UFC flyweight contender Sergio Pettis in the main event.

Johnson will face a tournament alternate in the night’s co-main event, with a lightweight clash between Brazil’s Patricky Freire and Irish contender Peter Queally also on the main card.

The main card will also feature England’s Michael “Venom” Page, who takes on American Derek Anderson in a welterweight matchup.