Conor McGregor told assembled media outside the Blanchardstown District Court in Dublin this morning that he would be back fighting “soon”. The 34-year-old attended court today as he was charged with alleged careless driving in relation to an alleged incident back in March.

The case has been pushed back to November 24 with McGregor remanded on bail until then. In a video posted by Mirror Fighting, the Irishman made his way through a flock of media to his black Mercedes as he attempted to leave but gave a few passing words on the way.

One reporter asked: “Conor, do you have any comment?”

McGregor replied: “I’m just off to shoot this film now and go and have fun.”

Another added: “When are you fighting again?” 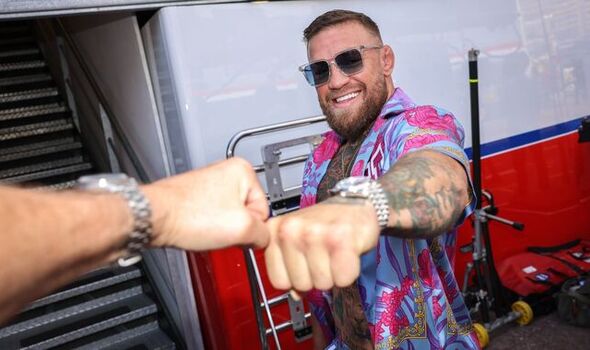 Before Notorious returns to the Octagon, he is set to make his big screen debut in a remake of 1989’s Road House. The movie is being directed by Doug Liman and will star two-time Golden Globe winner Jake Gyllenhal. Filming started two weeks ago but as confirmed by McGregor in the same video he will be flying out to join them in a “couple of days”.

McGregor has been out of action since breaking his left fibula and tibia last July during his UFC 264 main event against Dustin Poirier but is now back in training full time. The Dubliner was eyeing a summer return; however, UFC president Dana White has stated that an autumn date is a more realistic timeframe.

Speaking to The Sun, he said: “We’re looking at early fall if everything goes right.”

The tentative timeline is dependent on MMA’s biggest star being cleared to fight by doctors and his leg healing fully.

White added: “If his leg heals right and he gets the clearance to really start training, then possibly early fall. We’ll see when he’s ready to fight. And when the doctor gives him 100 per cent clearance, we’ll start looking at possible opponents.”

McGregor has had no shortage of callouts since the announcement of his proposed comeback. Henry Cejudo, Max Holloway, Michael Chandler, and Charles Oliveira have all offered to face him next with Chandler reportedly being the most likely option for the brawl in the fall.