Daniel Cormier’s job at UFC 261 was to provide live analysis as part of the commentary team.

But the former UFC heavyweight and light heavyweight champion found himself in the headlines after leaving his cageside position to engage in a heated confrontation with YouTuber-turned-professional boxer Jake Paul.

Paul, who has parlayed his huge social media following into a lucrative boxing career with Triller Fight Club in the States, had taken shots at Cormier on social media.

The two-time Olympian was less than impressed with what he saw and, after being heckled by Paul during the live broadcast, he confronted Paul in the stands and gave him a piece of his mind.

Speaking about the incident on his “DC and Helwani” show on ESPN, Cormier explained, “He’s like making faces at me and waving at me. 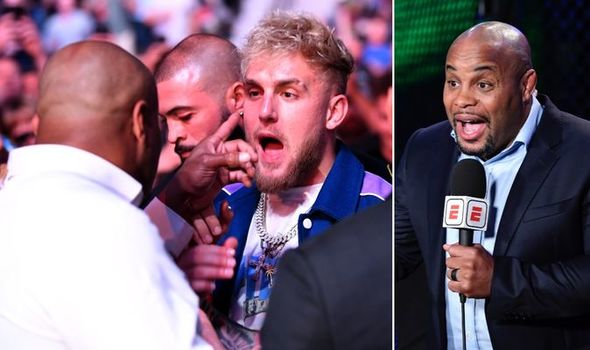 It prompted Cormier to ask producers for a short break between fights, and he approached Paul and exchanged words with the YouTuber in a face-to-face confrontation that was captured on social media.

“I just walk over there, and he kind of leans in like we’re gonna have a conversation, and his hands are in his pocket,” he said.

“I said, ‘Hey, I’m not gonna play your games. I go, ‘Don’t mess with me. I’m not a kid to play with like this. I’m not gonna be on the internet messing around and all this other stuff.’

“I go, ‘Keep my name out of your mouth.’ Once the security and everybody got around, he started to play big boy a little bit, starts trying to point and do all that. But initially, his hands are in his pocket and he kind of leans in.

“I said, ‘I’m not gonna play your game.’ I said, ‘You’re gonna get yourself hurt messing around. I’m not gonna fight with you and play these public shenanigans.’

But he has come under fire from the combat sports community by cherry-picking opponents with little-to-no boxing acumen.

However, his polarising persona, coupled with his huge social media following, have made his recent bouts huge pay-per-view occasions and, following his win over Askren earlier this month, Paul is now in search of his next opponent, and even shouted at Cormier to “sign the contract.”

Cormier said he has no interest in facing Paul in the boxing ring, but did say that if Paul really wanted to fight him, he’d be more than happy to welcome him to the octagon.

“‘Sign the contract’? What are you talking about? There is no contract,” Cormier said.

“You don’t punch down, but come on, dude. You can talk and act like that with certain people – not everybody.

“Why would I go and box Jake Paul? Who I am doesn’t make me chase anything.

“I made my money as the heavyweight champion of the world. I don’t have to chase a payday.

“This kid wants to fight? OK, I’ll fight him. But it’ll be a mixed martial arts competition.

“My name will not be used as a springboard. I love my legacy, and I will protect my legacy. And if protecting my legacy means I have to smack this kid upside his head, then that’s what I’ll do.”