Rhea Ripley defeated Asuka at WrestleMania to follow Bianca Belair in making history at the 37th edition of WWE’s extravaganza.

Less than 24 hours after Belair had won a stellar main event match against Banks to become Smackdown Women’s Champion, Ripley followed by suit by snaring the Raw title from Asuka.

The two victories would appear to usher in a new era of wrestling at the top of the women’s game for WWE, spearheaded by two of their brightest talents.

Ripley dominated much of the match against her more experienced, decorated opponent, making a mockery of her relatively tender years. The Aussie, just 24, was only signed by WWE some four years ago – she survived a painful-looking DDT from the apron to the floor to eventually see off the Empress of Tomorrow with the Riptide, ending Asuka’s lengthy reign.

Though it is undeniably WWE’s women who will emerge from WrestleMania having made the most significant history, little can be said against an incredible main event from Sunday’s instalment for the Universal Championship.

Champ Roman Reigns put his gold on the line against Edge and Daniel Bryan in a contest that had a genuinely huge, big-fight feel – each man had time in the ascendency and hit high-impact moves to leave it as anyone’s guess as to who would leave Tampa with the gold. In the end, after a hellacious, topsy-turvy match that legitimately saw all three come close to winning it, it was Reigns who came out on top with a successful defence, pinning both men for good measure.

The night had got off to a surreal start and something of a visual treat as The Fiend collided with Randy Orton after weeks of bizarre to-and-froing between the rivals on Raw. The presentation of The Fiend – and accomplice Alexa Bliss – was far more impressive than the match that followed their introductions, Bliss appearing to turn on her sinister ally by providing a distraction that enabled Orton to nail an RKO and secure the win.

While the early action at WrestleMania tested the patience of the live crowd, those watching were well and truly into the spirit of things by the time the match between Kevin Owens and Sami Zayn arrived. The pair, despite varying natures of their on-screen personas, have always been favourites of long-time fans, and the significance of these two friends being able to wrestle was not lost on them as they lapped up a hard-hitting collision which Owens won. Post-match, Logan Paul – who had been a guest of Zayn’s at the show – was given a Stunner for his trouble.

If that match set the tone for the level of physicality we could expect from there, the matches that followed certainly picked up the mantle. Though brief, both the matches pitting Sheamus against Riddle and Big E against Apollo Crews were similarly as intense.

Sheamus began another reign as US Champion after overcoming Riddle with a convincing display that ended with an incredible Brouge Kick while Riddle was in mid-air and upside down, while another new champ was crowned in Crews as an assist from the returning Dabba-Kato aided his win over Big E in a Nigerian Drum Fight.

Saturday’s first night of WrestleMania saw the team of Natalya and Tamina win a tag team turmoil match that was disjointed at best to earn themselves a Women’s tag team title opportunity against Nia Jax and Shayna Baszler on Sunday. The resultant title bout far exceeded the preceding one as all four women shone in an entertaining affair, not least Tamina who continues to work as one of the most underrated performers in the company. The champions would eventually retain after Natalya faded in submission to Baszler.

The first night of the show was, of course, dominated by Belair’s stunning win over Banks to claim the SmackDown gold. In a thrilling match-up, the EST of WWE put on an awe-inspiring display of strength, speed and athleticism to cap a meteoric rise through the ranks of the company – one she joined just a few years ago without so much as a day’s training under her belt. 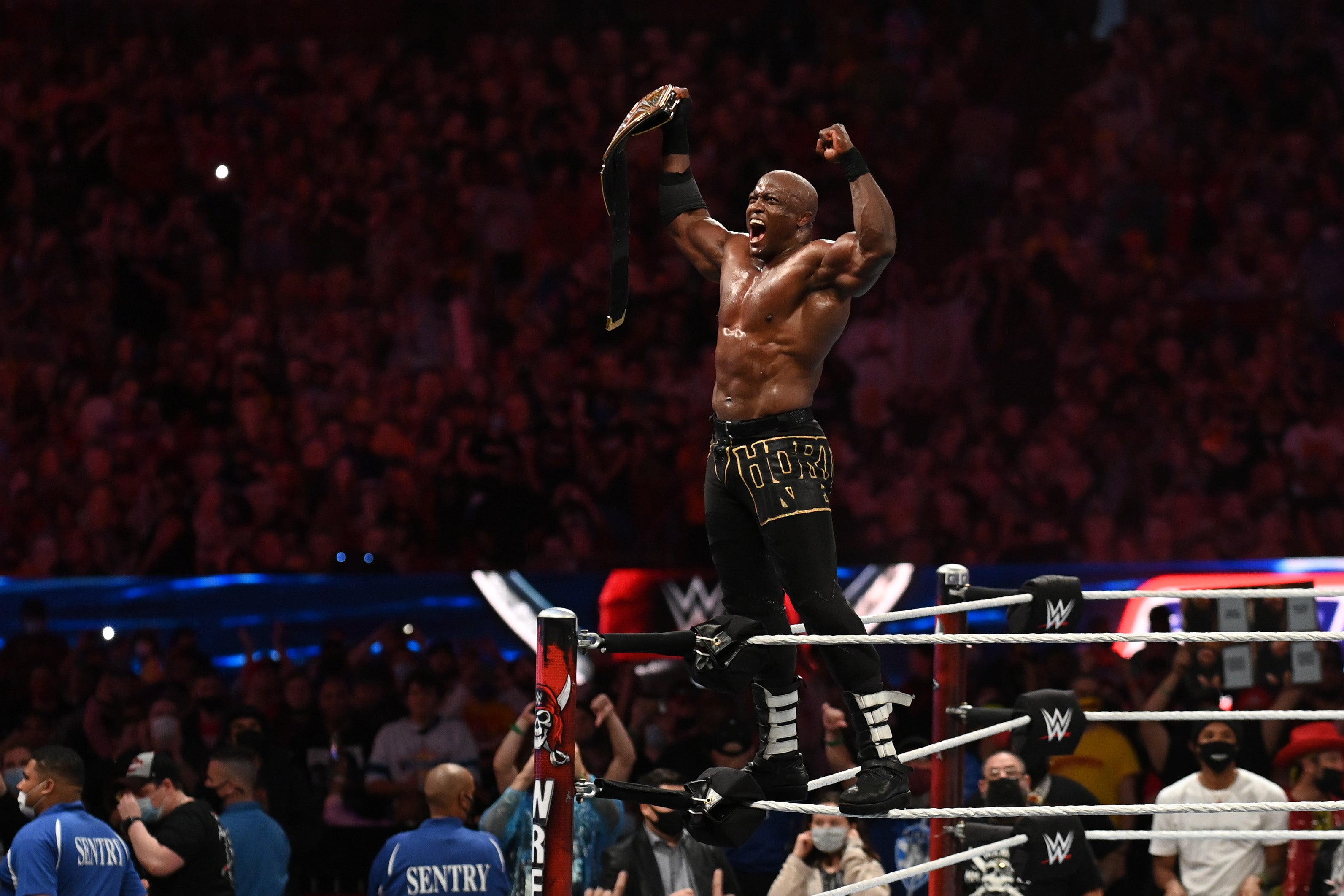 The UK’s Drew McIntyre was scuppered in his attempts to reclaim his WWE Championship in what was, after the delay, a wonderfully thunderous opening match of the night.

A month ago it would seemingly have been a safe bet to lump your house on McIntyre re-gaining the gold at this event, but it’s a testament to the progress and momentum built by Lashley since he took the title last month that he was able to retain – and cleanly, too.

With the crowd firmly behind him, McIntyre nailed three DDTs on his opponent but to little avail, Lashley now fully established as WWE Champion after managing to keep his Hurt Lock submission move in long enough for the Scot to fade and the referee to sound the bell.